.....Buzz if you like but don't sting me! Sorry had that little ditty buzzing round my head all last night when I was doing this weeks postcard for SPA where the theme is Bees if you haven't already guessed! LOL!
Headed for my Sheena Douglass stamps for this one with her lovely bejewelled bee from her Fantasy Floral collection.  The quote is from another one of Sheena's sheets, thought it was apt as apparently bees defy physics because they should be too heavy to fly. 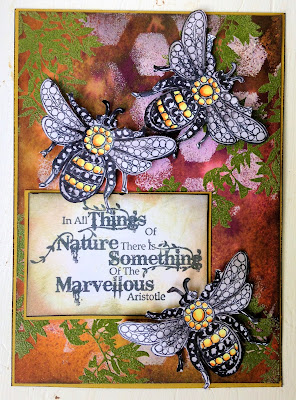 ......I just love Autumn........ the colours, the crisp clear mornings after a slightly misty start.....it probably is my favourite season.  Well this week I'm hosting the challenge over at TagAlong so what better theme than 'Autumn Glory'.  Here's my giant tag......

I used Tim Holtz Tattered Leaves die and coloured the leaves with a mixture of shimmer sprays (photo doesn't show shimmer very well unfortunately). The background was painted with acrylic, shaded with a little ink and then I stamped and embossed some branches for a little texture. Stamped a second smaller tag for the sentiment/quote. 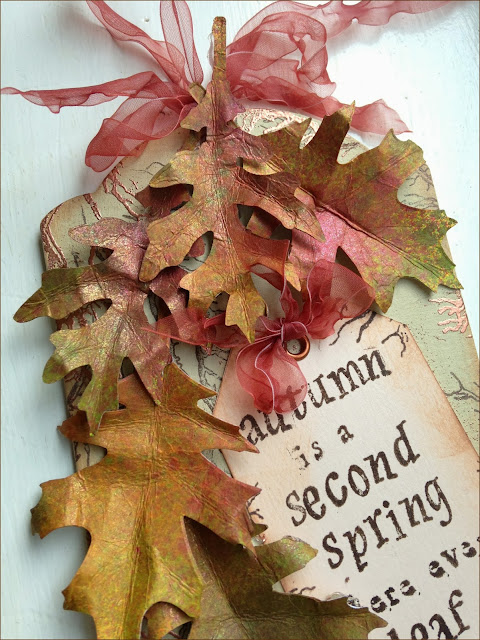 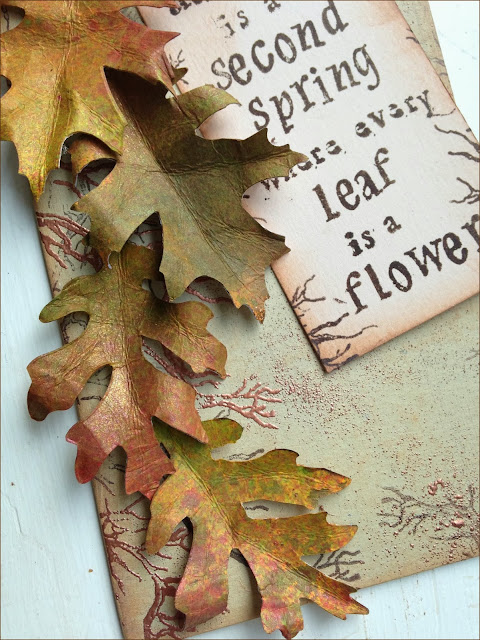 Here's my entry for Sunday Postcard Art.......only 2 days late!! Lol! The theme is transport, so I was thinking masculine and vintage BUT ended up creating something very feminine and vintage! Anyway she's riding a bike and that's transport so it fits ok!! 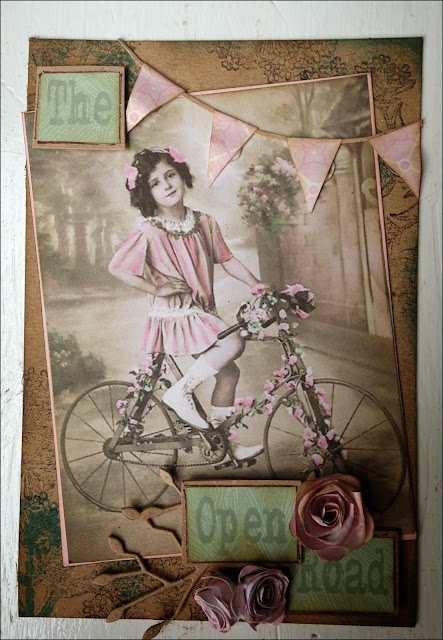 Time for another TagAlong challenge.... 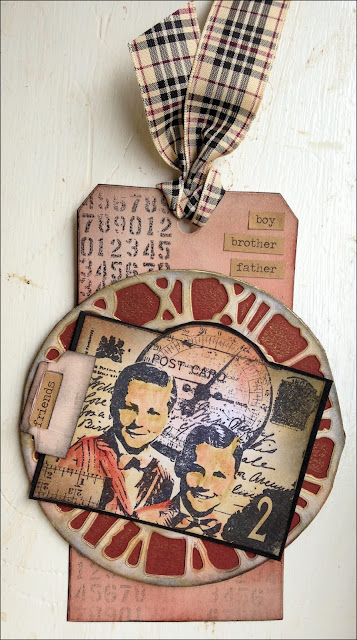 Why not pop over to Tag Along and have a play?

....at some of the new Sheena Douglass Oriental range.......stamps, embossing folders and papers.....todays sample features some of the new papers.  Started life as a simple but tired little desk tidy.  I painted it with black acrylic, added gold gilding wax to the edges then cut and stuck on some of the papers.  Finished it off with a couple of simple folded fans also made from the papers. 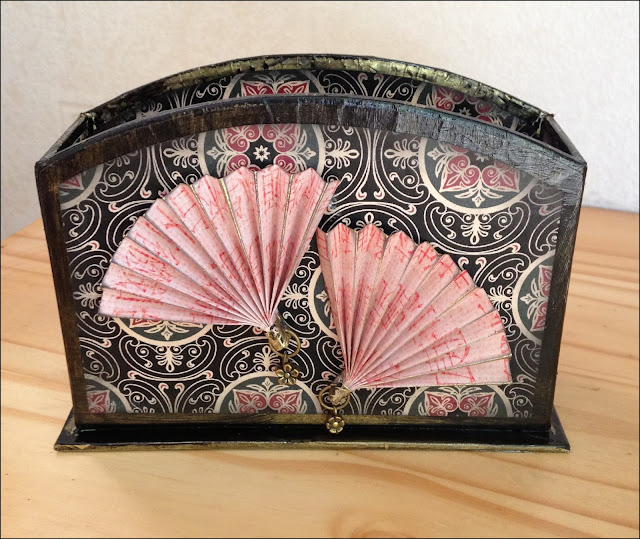 You can see the whole range when Sheena launches it on Friday 20th on Create and Craft.

Something Oriental coming your way.......

........Sheena Douglass is launching a new range of Oriental stamps, embossing folders and papers this coming Friday on Create and Craft, there will be lots of shows but the first will be Friday at 8am.
Here's one of the samples I've made..... 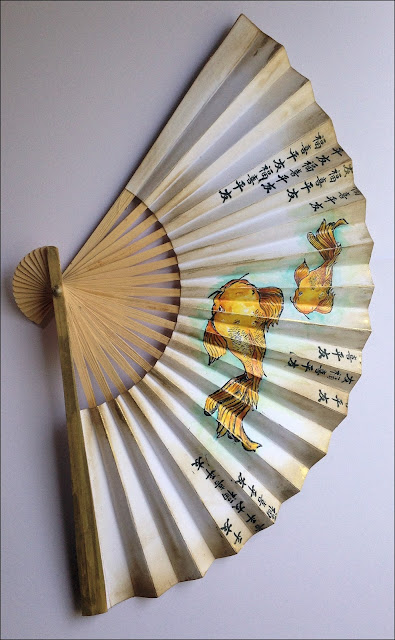 I bought a pack of cheap paper fans from Hobbycraft with the idea of stamping on one of them.  Well I'll be honest the first one was a disaster!  So kept stamping on the same one until I came up with the best way to get a decent result. Found that opening it as wide as was possible and then laying it on a folded towel before stamping was best.  The towel seemed to give it the extra 'squish' that was needed to get a good impression on such an uneven surface. After I'd stamped the images they were coloured with watercolours.....(not to wet!) and then I added some distress inks to the edges and some gold gilding wax. 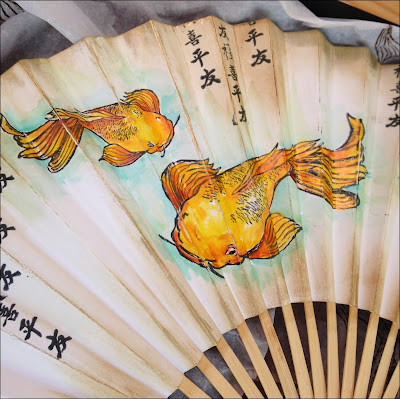 .....this weeks theme on the Tag Along challenge is Polka Dots. I've used a Sam Poole stamp from Creative Expressions, a Special Touch mask and some sequin waste to create my tag this week. Background colour is a mixture of ink and mica sprays. Oh and hadn't got any dotty ribbon so used my sequin waste and some white paint to create some!

This weeks Sunday Postcard Art theme is dance.........made a quick little postcard this week using a previously made background (spritzed with inks and mica sprays with some masks), a collage image and a little stamping and embossing..... 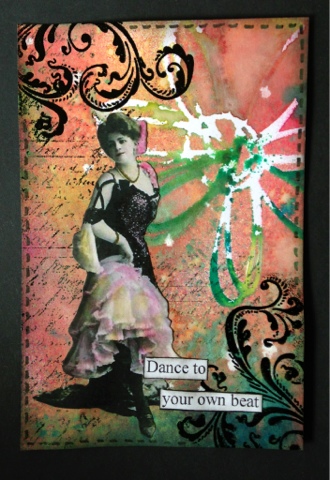 Donna xx
Posted by Unknown at 13:46 No comments:

.....a sample for Sheena's show on Create and Craft on Monday (9th). The birdhouse is a little Tando kit which I painted, inked and stamped before putting together. I used a cake pillar as the stand, this was also given the paint and ink treatment. I stamped the robins and multiple holly leaves from The Christmas Visitors stamp sheet, coloured them with watercolours and H2O's and then cut them all out. The snow I made by mixing light modelling paste with white acrylic which I then spread over the base and birdhouse. Once everything was dry I used some Stickles glitter glue to add some icy sparkle! 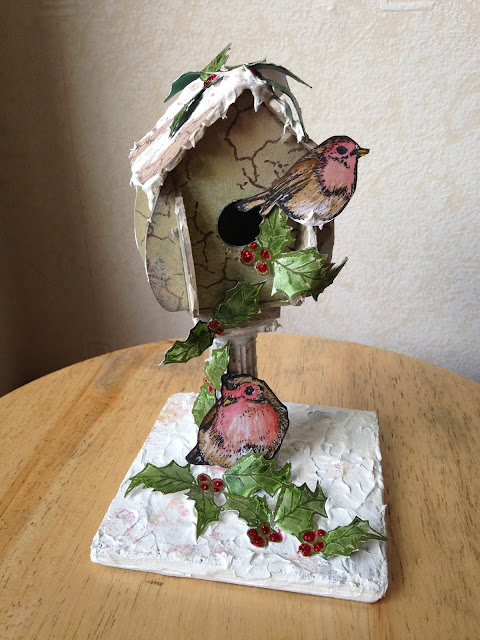 Time for another tag challenge...

....well it's time for another challenge on Tag Along and this week the theme is 'Birds'. Simple little tag from me using some stamps from Crafty Individuals and a sentiment off a Sam Poole plate from Creative Expressions. The background is made using a mixture of cosmic shimmer sprays with a little over stamping, the birds I stamped on white cad and then coloured with promarkers before cutting them out and gluing to tag.

......is the theme on SPA this week.  I've used images from an Artisitic Outpost stamp sheet this week.  The background is done with a mixture of acrylic paint and a little stamping for some added texture. I stamped the cowgirl onto some white card and coloured her in with promarkers before cutting her out and distressing edges with a little Distress Ink.The bunting was also stamped and coloured but when I cut it out and glued it on I used a little silicone glue behind each flag so it added a little more dimension. 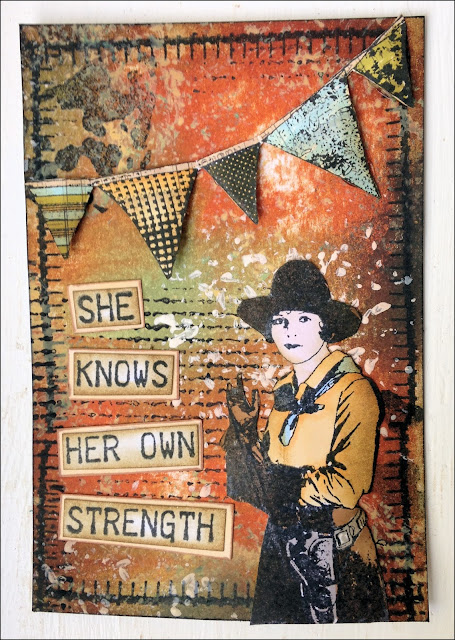 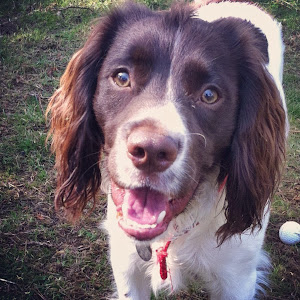 My beautiful and crazy boy

Proud to be a member of the Inkoids, Sheena Douglass's design team.